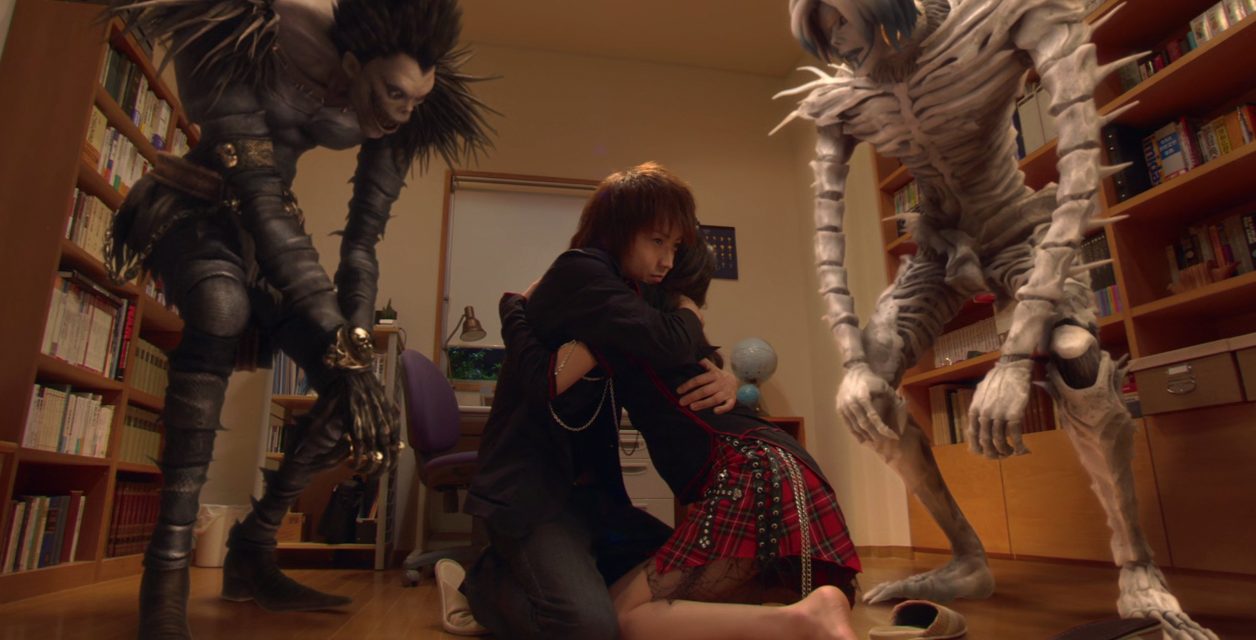 This review was written when Death Note II was first released. We’re offering up an unedited text version. We’ve prettied up the post a bit, but you can be assured that none of the text was edited from the original post.

You just can’t put a good book down, and the Death Note has people dying to get their hands on it. Death Note II: The Last Name, is the sequel to the adaptation of the popular Japanese manga. The movie, which runs a lengthy 139 minutes, attempts to conclude the story of the search for Kira and the duel of wits between Light Yagami and L. To say some things have changed would be a massive understatement, but fans of the manga and anime should feel satisfied with the ending.

The involvement of Misa, played by Erika Toda, this time around is far more involved, showing her affection for Kira and wanting to help him in his quest to rid the world of crime. We’re also introduced to a third user of the Death Note in Kiyomi Takada, played by the attractive Nana Katase. Her role has been changed from the spokesman of Kira to an ambitious TV reporter who uses the Kira situation to catapult herself into the anchor’s chair.

Tatsuya Fujiwara still excels at playing the twisted Light, giving you a sense of just how evil he can be. Stealing the show though is Kenichi Matsuyama’s L, whose does an excellent job playing the eccentric detective nailing L’s peculiar mannerisms, including the way he sits, eats, and stares. The rest of the principal cast is composed of the same actors from the first film and were still treated to the use of the English dub cast from the first film and anime. The one notable exception being Rem, who has a gone from a female voice to a male voice this time.

As a stand-alone, the movie occasionally suffers from some poor acting and mediocre production values which is all to apparent with the way Ryuk and Rem look. It’s as if they were created in photoshop and inserted into the film, they look totally out of place. At times I thought I was watching some B-movie with the way the film looked. It had an amateur camcorder feel to it at times, while other times it looked excellent.

What I found interesting, and a reason to the movies slow pace was the lack of a musical score. The introduction and credits are pretty much the only place it had music, and it was courtesy of the Red Hot Chili Peppers’ Dani California and Snow (Hey Oh) respectively. Most movies use music to ratchet up the suspense and drama, and this could have definitely used some.

Overall, Death Note II was a good movie, but nothing memorable. It had its moments, as well as a couple you’d like to forget. It’s hard to cram so much story into two movies so it’s forgivable how much was removed, but to change the ending the way they did seems a bit extreme. Still, if you’re a fan of the manga, anime or the first film then you’ll want to check this out.