After ten seasons of hopping around the galaxy the Stargate powers that be had decided to end the television series and take the team into a new direction, straight-to-dvd movies. Stargate: The Ark of Truth is the first in a series of of movies that will revolve around the Stargate SG-1 team. With a bigger budget and more time to dedicate to one storyline, the Stargate movies are poised to be bigger in every sense.

The premise revolves around an Ancient artifact which supposedly contains a device that will cause anyone who views it to know the truth about the Ori. Causing the person to realize that the Ori are false gods, hopefully causing them to lay down their arms in service of the Ori. The SG-1 team is split into two groups with group one made up of Daniel Jackson, played by Michael Shanks; Vala, played by Claudia Black; and Teal’c, played by Christopher Judge as they go after the Ark with the aide of Vala’s husband and Ori soldier, Tomin, played by Tim Guinee. Colonel Sam Carter, played by Amanda Tapping and Colonel Cam Mitchell, played by Ben Browder, take to the skies aboard the newly outfitted intergalactic spaceship Odyssey. Trailing the colonels around is IOA observer James Merek, played by Currie Graham, whos job it seems is to make things difficult for the SG-1 team.

If you’re thinking to yourself, who’s who and what’s what don’t worry. Also included is a prequel or sorts that gives you the backstory needed in order to understand who he Ori are and what’s going on. It’s great for those that need a refreshener from the tenth season, and even better if you’re new to the world of Stargate.

The Ark of the Truth is jam packed with great action, capitalizing on its bigger budget. It’s definitely got some scenes that would be on par if not better than a lot of sci fi movies that have been released in theaters and made with much larger budgets. It’s clear that the producers were going all out and it worked. The cinematography definitely looks big budget as well, especially the scene of Teal’c trekking through the snow-covered mountains.

The story neatly wraps up the Ori story line that was left over from the television series, and it also opens up a couple of new stories which I’m sure will be developed over time. The writers did a good job tying up the loose ends with the time they had.

Overall, I really enjoyed The Ark of Truth. You can tell a lot of time and effort was put into the production and it paid off. The acting was top notch and all of the production values were superb. If you’re a fan of Stargate then The Ark of Truth is something you absolutely must check out. If you’ve never seen the show but are a fan of fantasy and sci fi fan then you’ll be pleasantly surprised by how big a small show can look when it becomes a full-length feature on DVD. 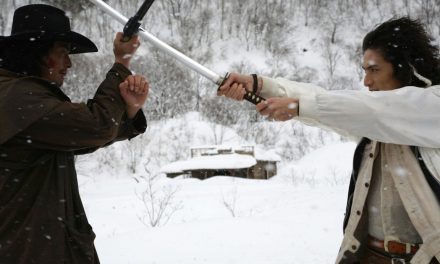 Snakes on a Plane