The following review contains spoilers, as that is the only way to aptly review the film .

In 2009 J.J. Abrams introduced a rebooted Star Trek into the hearts and minds of fans everywhere, it was a critical and commercial success and set the bar extremely high for any sequel. Well, Abrams is back with Star Trek Into Darkness, the sequel to the rebooted Star Trek, and it lives up to the hype surrounding it. With breathtaking visuals, the return of the Enterprise’s crew and the introduction of a worthy adversary, Into Darkness takes us to worlds both new and familiar in spectacular fashion.

When he first created Star Trek, Gene Roddenberry acknowledged that he created a show that he could use to examine contemporary issues in society. It’s clear from early stages of the movie that Abrams and the writers of the latest film, Roberto Orci, Alex Kurtzman and newcomer Damon Lindelof, have decided to continue the spirit of Roddenberry by introducing themes that can be found in todays society into the film, without getting overtly political.

The movie opens on the planet Nbiru, where the crew of the USS Enterprise is on a mission observe a primitive civilization. Unfortunately for the natives a massive volcano is about to erupt and destroy the planet, and kill off the inhabitants. This leads captain James T. Kirk (Chris Pine), to violate Starfleet’s most important rule, the Prime Directive, a principle that dictates that the Federation will not interfere with alien civilizations which they discover or observe. With the help of First Officer Spock (Zachary Quinto), Sulu (John Cho), and Uhura (Zoe Saldana) the crew of the Enterprise plans render the volcano inert and save the planet.

Unfortunately plans rarely go as planned for the Enterprise, and we find Spock stuck on an island within the volcano with little chance for survival. After a quick chase through a jungle by the natives, Kirk and Doctor McCoy (Karl Urban) make it back to the Enterprise with minutes left to decide how to save Spock. One thing leads to another and we see Kirk violating the Prime Directive a second time when he exposes the Enterprise to the natives and it rises from the bottom of the sea to beam Spock on board.

The violation compels Spock to submit a report to Admiral Christopher Pike (Bruce Greenwood) informing him that, even though Kirk saved his life, the Prime Directive was violated. Kirk’s anticipation of being assigned to a five year mission to explore space was quickly squashed. Spock’s report has directly resulted in a demotion for Kirk, as Pike re-assumed command of the Enterprise with Kirk ultimately being demoted to First Officer of the ship. This creates some tension between Kirk and Spock, especially with Kirk’s feeling that he was thrown under the bus.

The attention shifts to London, where a Starfleet officer is promised the chance to save his daughter by the movies villain, John Harrison (Benedict Cumberbatch). There is one thing he has to do though, and that is destroy a secret Section 31 facility under the Starfleet archives in London. Domestic terrorism has hit close to home and Starfleet, led by Admiral Alexander Marcus (Peter Weller) is putting all of the available resources into catching Harrison. He’s the most wanted man in the Federation, but he’s not done just yet.

While most of the Federation think that the London location was part of Starfleet Archives, only a select few know its true identity. Unfortunately for many in Starfleet they’re left in the dark to the true reason of the attack, and that includes Kirk and Pike who attend an emergency meeting at Starfleet headquarters. Just as knowledge was being shared with the group assembled, headquarters comes under attack from Harrison. He knew they would call an emergency meeting and wanted to eliminate high-ranking officers in the command.

The attacks leaves numerous dead, including Pike. This ultimately puts Kirk back in command of the Enterprise as they’re tasked with eliminating Harrison, who’s been located on the Klingon home world of Kronos. Admiral Marcus knows that by attacking Harrison in Klingon space it could lead to a war, one which he believes has been building up for some time. Unfortunately for Kirk and company, Harrison proves a formidable opponent, thanks in no small part to his superhuman intelligence and strength.

Spock opposes assassinating Harrison with special photon torpedoes provided by Starfleet, as it would be depriving Harrison of life without charge or trial. He also argues that killing Harrison would be a violation of Kronos’ sovereignty. thus justifying the Klingons attack on the Federation. After some persuasion, Kirk decides to leads a team to capture Harrison alive.

Aboard the Enterprise, Harrison reveals his true identity. He is a genetically engineered superhuman named Khan, who was woken from a 300-year cryogenic sleep by Admiral Marcus  to take advantage of his savagery and have him develop weapons to aid in war against the Klingons. And, the photon torpedoes actually contained 72 cryogenically frozen colleagues that would have died if they were all fired upon Khan.

News of Khans capture leaves a bitter taste in Admiral Marcus’ mouth since his ultimate goal was to rid Khan and his colleagues while starting a war with the Klingons. One thing leads to another and the Enterprise is chases by Admiral Marcus and a new ship designed specifically for war. I don’t want to spoil any more than I already have, so I will leave you with a short, but poignant statement… this is were it gets serious. There is action galore, as Kirk and Khan team up to take on Marcus and Section 31. Many fans of the original Star Trek will lament all the action, but it works well within the story and allows the characters to shine. Almost everyone has their place, especially Scotty (Simon Pegg), but it was unfortunate to see Chekov (Anton Yelchin) relegated to a more superfluous  role. 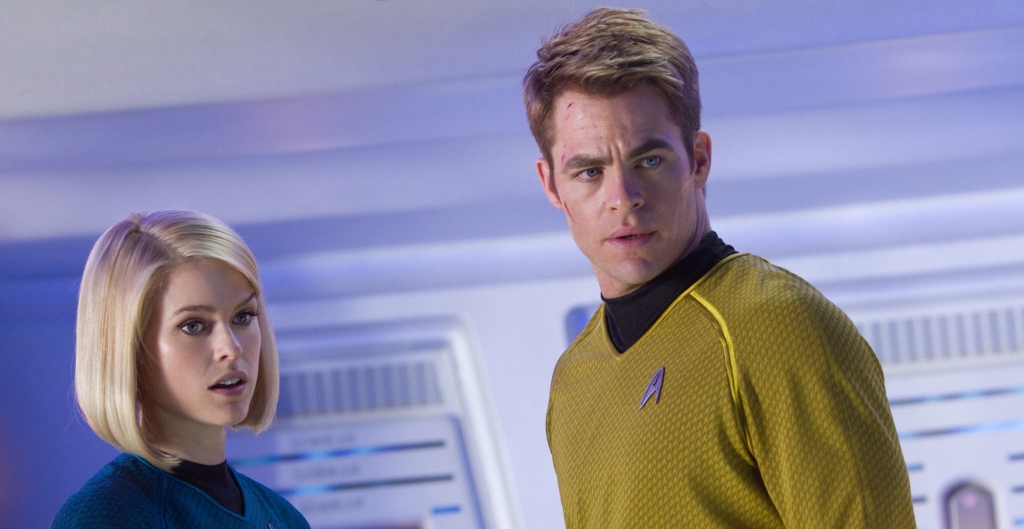 One of the great things about Into Darkness is how it deals with emotions and connections.  From Spock’s release of his human half during the chase scene with Khan to Scotty’s pleas on not bringing the torpedoes aboard, it’s the emotions that bring the characters to life. The acting certainly helps, and is top notch all around, especially Cumberbatch’s portrayal of  Khan. It’s nice to see a cast bring the story to life with such vigor and belief in what they’re doing.

The visuals in Into Darkness are outstanding, from the cityscapes to the action scenes, to the special effects are outstanding. The upgrade the Enterprise received over the television series, as well as the previous movies, really stands out. My only real complaint was the redesign of the Klingons. Sure they still have their ridges, but a number of things on them were different, from their noses, to their ears and the back of their heads. Sometimes it’s just better to leave something alone. Minor nitpicking aside, there’s nothing to complain about when it comes to the movies visuals.

Overall, Star Trek Into Darkness was an extremely fun film that capture the essence of Star Trek and made it accessible to fans of the series and those who’ve never viewed anything Star Trek related. It captured some of the best parts of the earlier films, while giving its own take on today’s socio-political issues. Let me leave you with the most famous lines from Star Trek you will ever heard…

“Space, the final frontier. These are the voyages of the starship Enterprise. Its five-year mission, to explore strange new worlds, to seek out new life and new civilizations, to boldly go where no one has gone before.”