After watching The Fountain I was a bit skeptical about Darren Aronofsky latest film, The Wrester. Thankfully the film is nothing you’d expect from the Brooklyn born director. Instead of visually experimental and complex films like Requiem for a Dream and The Fountain, The Wrestler takes a down and dirty approach. The film hinges almost entirely on the performance of its lead and its ability to draw you in and make you care about the people.

The film revolves around Randy “The Ram” Robinson, played brilliantly by Mickey Rourke. Randy was once the biggest professional wrester in the world, with millions of fans world wide. Fast forward to 2009 and things have changed mightily for the Ram. Now he finds himself in his mid 50s, wrestling on the local scene on weekends for pittance. Mentally, he’s still stuck in the 80s and it’s taking a toll on his mind and body. His aging body can no longer take the punishment and he finds himself using drugs to numb the pain. To make ends meet he wrestles on the weekends and spends his weekdays working in a grocery store. The glamorous life he once lived is long gone, but it’s only in the ring, in front of a roaring crowd that he’s not lost and alone. He keeps wrestling because in the ring he feels like he’s worth something, unlike his life outside the ring.

The film is not about wrestling, but about a man whose life is completely empty. After spending a lifetime so devoted to a single pursuit, he’s self-destructed and ruined everyone and everything else around him. He’s managed to go from the high life to the low life, living alone in a trailer park. He’s pushed away his daughter and has no friends. His only contacts come through work and the wrestling he performs on the weekend. His only real friendship comes through Cassidy, Marisa Tomei, played an exotic dancer he frequents. For the two of them, there’s more there than a business transaction. There’s an understanding between the single mom and Randy that life isn’t easy and that’s because of the choices they’ve made. She sees what her future can become and she sympathizes with him, sensing the gentle man lurking inside his scarred frame.

You’ll find yourself sympathizing for Randy because you know that he’s a good man who understands his mistakes, but doesn’t know how to fix them. He’s big and broken, but he just wants to belong to something. He’s tired of being alone. After experiencing a heart attack after a match he’s forced out of the ring, and he finally gets his change to right his wrongs. He attempts to reach out to his estranged daughter, he takes on more responsibilities at work and he attempts to become something more to Cassidy. For the first time in his life he sees a future without wrestling.

Unfortunately it all falls apart. After almost making amends with his daughter he reverts to his old self and neglects her yet again. This time she’s not as forgiving and tells him that she wants nothing to do with him. He quits his job and decides to get back into the ring, the only place where he feels at home. This also means he’s put his life in jeopardy, but to him he’s doing the only thing he knows how to do. At this point he doesn’t care if he lives or dies, he just wants to feel wanted and he’ll do that the only way he knows how.

Not enough can be said for Rourke’s performance, he grabs the bull by the horns and and drags it all over the place. Perhaps his own career has helped him, but he’s managed to give the Ram a sense of dignity and humanity throughout the film. Tomei’s performance was top notch as well. She really shines as a stripper on the edge of being past her prime, you can see it in her face that she wants it to end but she can’t make it stop. Aronofsky did a very good job behind the camera, capturing the feel and excitement of the wrestling matches with the droll of Randy’s life. At times it felt like it dragged though, but it didn’t take away from the movies shine.

The Wrestler is a very good movie, but it lacks some style. As good as Mickey is, the entire film can’t rest on his shoulders. All minor complaints aside, the movies perfect casting and the story Quaid tells, makes The Wrestler a must see. 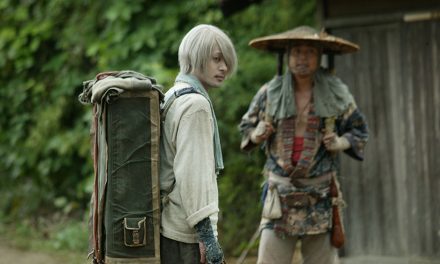