I had heard so many negative things about Pathfinder that my expectations were pretty low. Don’t get me wrong, I wanted to watch this movie and was eagerly awaiting it, but I expected the worst. Thankfully everything negative I heard was wrong. Pathfinder, a remake of a 1987 Norwegian film, was a fun movie that lets you just sit back and enjoy the ride.

The movie starts out with a Viking war party that has landed on North American shores some 600 years prior to the arrival of Christopher Columbus. After some typical raping and pillaging, with some added genocide thrown in for good measure, the Vikings decide to leave but unfortunately one of their ships became wrecked on shore. We find that a young boy was left behind, abandoned in a strange land. He was a stranger in a strange land. After a Native American woman comes across him she brings him back to her tribe where the council agrees to adopt the boy and raise him as one of their own. Fifteen years later the Vikings are back, and they’re looking to pillage and kill.

With their return comes a trail of death and destruction. Ghost, played by Karl Urban, as he’s now known as, finds his adoptive tribe slaughtered. He vows his revenge and sets out on killing as many of his brethren. From there the entire movie becomes almost one big fight scene, yet it works. There’s very little plot wise or even dialogue wise, for a movie that’s almost an hour and a half you could probably fit all lines of speech into about ten minutes at the most. What the movie lacks in dialogue it more than makes up for in emotion.

The action direction and cinematography are excellent. It has a great washed out look that makes it feel like the times were desperate and chilling. The fight scenes were great, although you have to suspend you sense of belief at times considering the high kill count. But that’s what the movie’s all about, sitting back and having a good time.

Pathfinder is nowhere near being an award winning film. It’s a movie that’s meant to entertain you and give you the feeling that you can kick anyone’s ass. There’s nothing thoughtful about the movie. It’s just an action packed fun fest, but sometimes that just what you need.

Fun with Dick and Jane 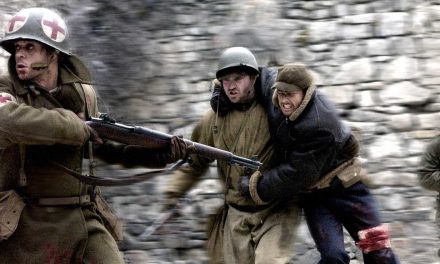